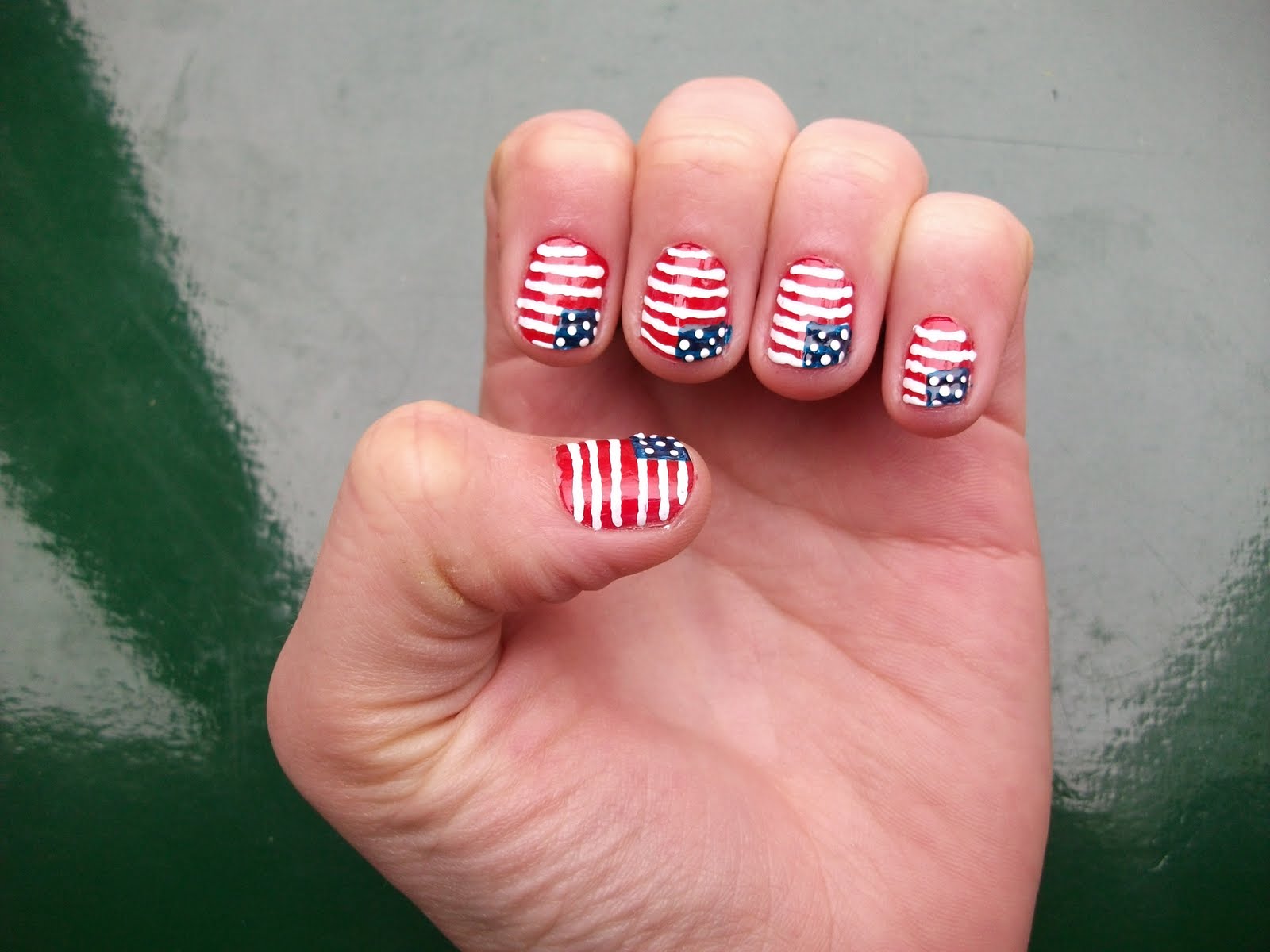 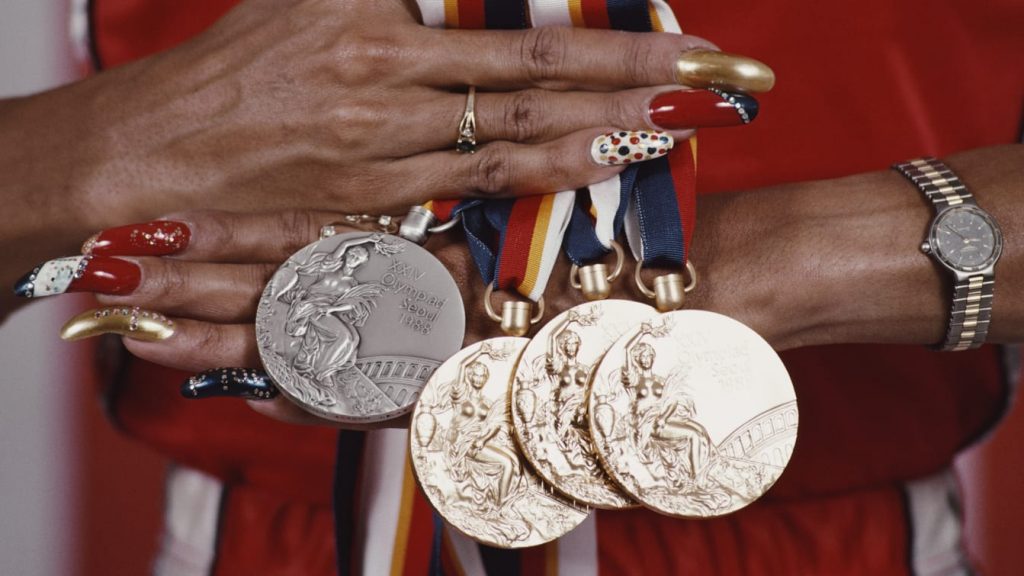 As Olympic sprinter Dina Asher-Smith sailed over the finish line in the women’s 100 meter semifinals, photos captured her vibrant blue nails as she celebrated. It may have seemed like just another of Asher-Smith’s stylish competition looks, but zooming in on her manicure revealed a meticulous recreation of a Japanese masterpiece: Hokusai’s “The Great Wave off Kanagawa.”
The nail artist behind the manicure, Emily Gilmour, said the British athlete was “very involved” in the design process. The nails intentionally “celebrated” the Olympics’ host country, she explained over email, adding, “She wanted a nod to Japanese culture.”

With every Olympic Games, professional athletes are expected to act as spokespeople for their nations on the global stage. The public scrutiny goes beyond sporting prowess to encompass their social media presence and physical appearance — nail art included.
Over the years, Olympic manicures have become a tournament ritual for some, and a form of soft diplomacy for others, whether that means following Asher-Smith’s lead by honoring the host country or proudly sport gel nail flags in a show of patriotism.

Gilmour believes bold manicures have become popular among athletes as they’re “eye-catching” and a way to “express themselves, while their uniforms all match each other.” While showy manicures typically take a more playful or patriotic approach, Swedish high jumper Emma Green Tregaro used hers politically at the 2013 World Athletics Championships in Moscow, where she sported rainbow nails in protest against a Russian ban on so-called gay “propaganda”. After being informed she was in breach of the rules (the sport’s governing body warned that Tregaro may have violated the event’s code of conduct) she repainted them red.

Manicures have become an increasingly common sight at the Games, with some organizing committees now arranging for nail salons to be set up in the Olympic Villages where athletes live throughout the event. Despite coronavirus restrictions, a nail salon has still been set up for participants in in Tokyo this year, and athletes including US volleyball player Kelsey Robinson have shared tours of the space on TikTok.
Speaking to CNN Style over email from Tokyo, Robinson said the Olympic Village nail salons were incredibly popular. She added, “Sometimes it can be hard to get a reservation for the day.”

The Olympic nail tradition arguably began when Florence ‘Flo-Jo’ Griffith Joyner, a Team USA sprinter and the mother of show-stopping manicures, brought her experience as a former nail technician to the track. Her legendary performance at the 1988 Seoul Olympics, which saw her break multiple records, also featured a manicure that has gone down in history: a crystal-embellished set of nails in red, white, blue and gold. They paired well with the three gold medals she won that year and may have inspired future Olympians to follow in her footsteps.
Speaking to CNN in 2012, more than a decade after Joyner’s death, her husband Al said, “Every time you see a woman in the 100 or 200 meters with make-up and nails, that’s Florence. She did it with style and she did it with speed.”
Since then, nail art appears to have grown in popularity among Olympians. “It’s a way for athletes to express themselves beyond just their performances,” Robinson said,

In the case of Hong Kong Olympic swimmer Camille Cheng, it is also a way of standing out beyond your uniform. “As swimmers, we race in pretty standard caps, goggles and suits,” she said over email from Tokyo. “I feel that getting my nails done adds a bit of my personality.”

Cheng’s hand-painted soft gel manicure featured the Olympic rings, the Japanese flag and bauhinia flower that appears on Hong Kong’s flag. Nail artist Nana Chan, from the Hong Kong salon Tinted, also created miniature swimmers battling the waves, which were made up of blue swirls and negative space.
“For this Olympics, I wanted to have Hong Kong represented, Japan (as it’s being hosted in Tokyo), the Olympic Rings and something water or swimming related,” explained Cheng, who also competed at the 2016 Rio Olympics. “We are proud to represent our country on the biggest sporting stage and we reflect that in our nails.”
Tinted founder Carroll Lee, called it an “honor” to work with Cheng, while nail artist Chan said: “It was almost like Camille was bringing my spirit with her to participate at the Olympics.”
Plenty of other athletes have taken a patriotic approach at this year’s Games, including Swiss tennis player Belinda Bencic, who referenced her country’s flag with a red manicure, complete with a white cross on two accent nails, and 13-year-old Brazilian skateboarder Rayssa Leal, who painted each nail a shade from her national flag.
Others have also gone for subtler tributes: In an apparent reference to Japan’s flag, Naomi Osaka painted her tips red and white, while French shooter Melanie Couzy wore a gray manicure accented with stripes of red, white and blue. 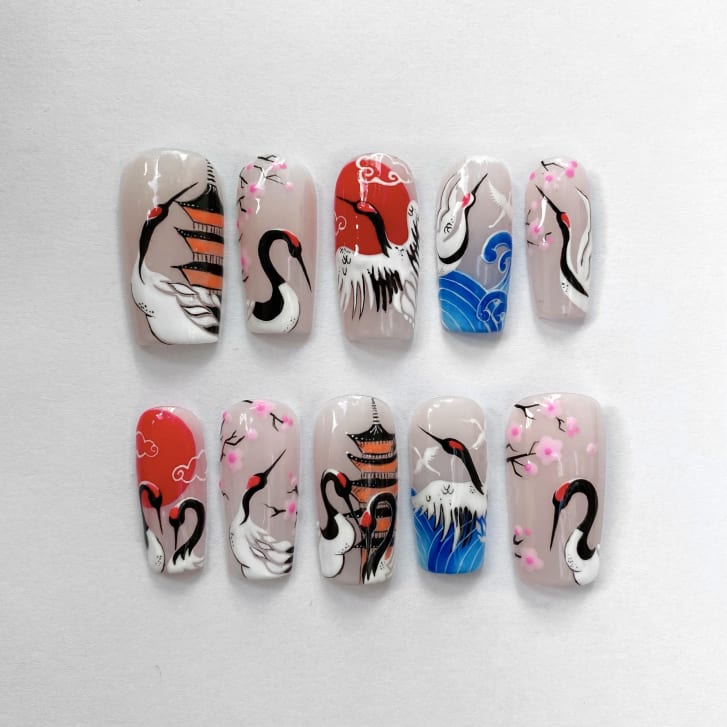 Other athletes willed on Olympic successes through their nail art, with some, including British taekwondo athlete Jade Jones, painting gold medals and Olympic rings onto their tips and toes. It certainly paid off for Filipina weightlifter Hidilyn Diaz, who also had a gold medal painted onto her nails as she won the Philippines’ first ever Olympic gold last week.
Gilmour and Asher-Smith went down a similar route for the sprinter’s second set of nails, which featured Japanese cranes set against a backdrop of pagodas, waves and cherry blossoms. Gilmour pitched the idea to Asher-Smith after discovering the bird was a symbol of good fortune.
“I do believe that nails can be a form of good luck,” Gilmour said. “For me, nails are no different than having a good luck necklace or other form of talisman.”

Making sure the talismans stay in place is another issue, however. For Asher-Smith’s elaborate designs, Gilmour created a set of press-ons “easily applied with nail glue,” as they were best-suited to high intensity sports where “nails may incur pressure.” ManiMe, a company specializing in stick-on gel nails that take just 15 minutes to apply, has also provided similar products to the US women’s rowing team in the recent past, with founder Jooyeon Song saying over email that the athletes “were looking for a nail solution that could withstand their grueling aquatic training schedule.”
For others, like Cheng, manicures have become a “pre-race ritual” and form of self-care amid intense training. “We work hard during the season and for me, the fun part is getting to race,” she said, adding: “I feel that getting my nails done is like a pampering session (and a way to) treat yourself for the hard work.”